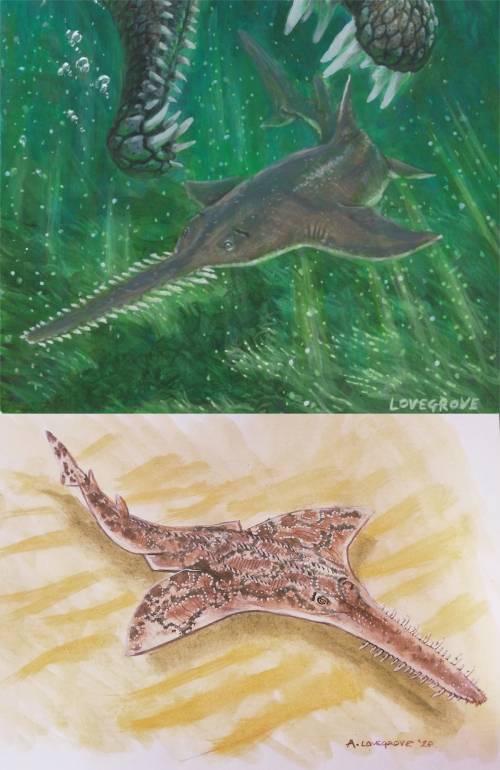 Two different versions of Onchopristis, top based on Pristis (2015) and bottom based on other sclerorhynchoids (2020). Art by Alexander Lovegrove, used with permission.

I was inspired to write this post after seeing the National Geographic article on the recently discovered Spinosaurus tail. In particular, it was the artwork by Davide Bonadonna in this article that caught my eye. While the art itself is well-done as usual, the Onchopristis numida depicted therein is not very accurate. Bonadonna’s Onchopristis is almost an exact copy of the modern sawfish Pristis, which has become a bonafide paleoart meme by this point. It’s been portrayed the same way in numerous other artworks and even documentaries like Planet Dinosaur. In reality Onchopristis is a member of the extinct suborder Sclerorhynchoidei and would have looked markedly different from sawfishes. 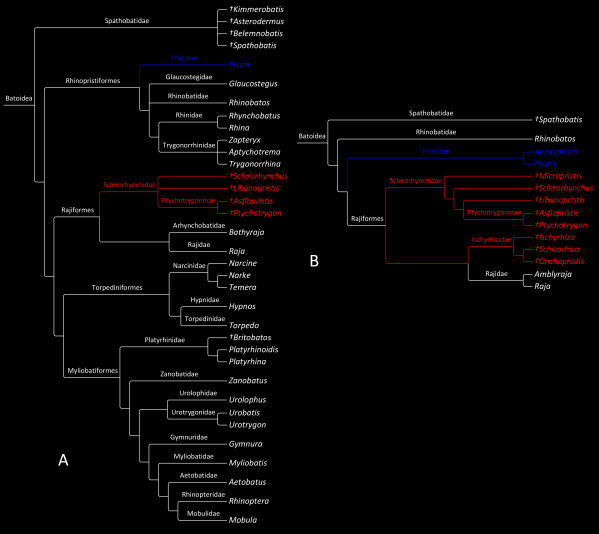 Villalobos-Segura et al. (2019a;b) performed the only phylogenetic analyses of the Sclerorhynchoidei so far. Their second analysis recovered Sclerorhynchoidei as a paraphyletic grade leading up to Rajidae, with two separate families, Sclerorhynchidae and a clade consisting of Ischyrhiza, Schizorhiza, and Onchopristis. While Villalobos-Segura et al. did not name the latter clade, the oldest available name would be Ischyrhizidae Cope, 1875. Their first analysis only tested sclerorhynchids and not ischyrhizids, but similarly found them to be rajiforms. These results suggest that sclerorhynchoids were more closely related to extant skates than to sawfishes. In turn this would mean that sclerorhynchoids evolved an elongated, denticle-bearing rostrum independently of sawfishes.

The most complete rostrum of Onchopristis with reconstructed denticles in grey, modified from Stromer (1925).

The convergent evolution of the rostrum is further supported by the denticle replacement of sclerorhynchoids. Pristids do not replace lost rostral denticles, and as a result their denticles are all roughly equal in size. In contrast, sclerorhynchoids replaced lost denticles continually throughout their lives. In Onchopristis lost denticles were replaced by larger ones, resulting in denticles of uneven sizes. In other sclerorhynchoids like Sclerorhynchus, lost denticles were replaced by ones of identical size. This mode of replacement is actually more similar to the unrelated sawsharks (Pristiophoriformes) than to sawfishes (Slaughter & Springer, 1968; Underwood et al. 2016). An almost complete rostrum of Onchopristis described by Stromer (1925) shows this replacement, with the preserved bases of the denticles being varying sizes. Also note the small denticles on the end of the rostrum that are absent in pristids. 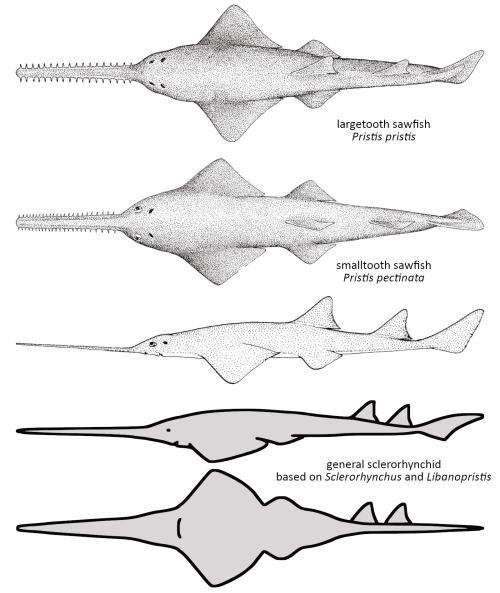 Since no ischyrhizids have been found with a preserved body outline, reconstructing Onchopristis must rely on the sclerorhynchids Sclerorhynchus, Libanopristis, and Micropristis from the Late Cretaceous Lebanese lagerstätten. The soft tissues in these genera show a smooth transition from the rostrum to the head, with an average rostrum length-to-body length ratio of 1:3.27. The pectoral and pelvic fins are located close together, while both dorsal fins are behind the pelvic fins and closer to the caudal fin (Cappetta, 1980; Sternes & Shimada, 2019). The body of Onchopristis would have been covered in large, spiny denticles like those of extant thorny skates, which were previously referred to the separate genus Peyeria. Similar dermal denticles have been found in Ischyrhiza and all ischyrhizids may have had them (Cappetta, 2012; Sternes & Shimada, 2019). 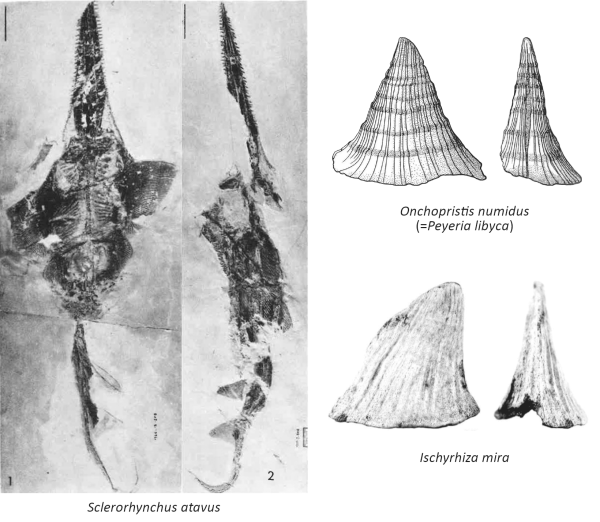 With all this fossil evidence it’s clear that Onchopristis and other sclerorhynchoids differed from pristids in many aspects of their anatomy.  The status quo in paleoart of copying Pristis is inaccurate and should be discouraged. A shift in terminology might be helpful for recognizing these differences for paleoartists and general audiences alike. I propose that sclerorhynchoids be referred to as “sawskates” to distinguish them from sawfishes and sawsharks and to reflect their phylogenetic placement as rajiforms.

Special thanks go to Alexander Lovegrove who let me use his great Onchopristis art for this blog. Check out his Twitter and DeviantArt pages.

Charlie Underwood has left some intriguing comments (see below) regarding a private specimen of Onchopristis with mostly complete postcrania. It appears that it had a reduced or absent caudal fin like modern skates. This would also correspond to the reduced caudal fin seen in complete specimens of Sclerorhynchus. Thus, sclerorhynchoids should not be restored with prominent caudal fins like sawfishes.

View all posts by Tyler Greenfield

My name is Tyler Greenfield and I’m a paleontology student. Incertae Sedis is where I post my miscellaneous writings about natural history.